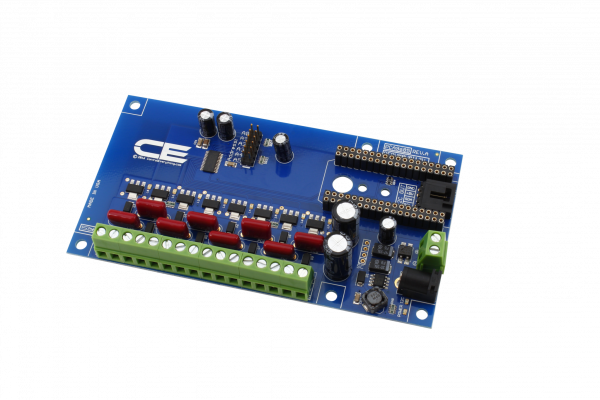 This 8-Channel power FET driver allows 12-Bit variable control of high-current loads your favorite IoT communications technology via I2C communications.  This device uses eight BUK98150-55A power FETs, allowing PWM cloud control of 8 channels.  Control DC Motor Speed, vary the opening of proportional valves, adjust brightness of LEDs or incandescent lighting from anywhere in the world.  The BUK98150-55A is capable of controlling up to 12VDC and 5.5 Amps of current (8 Watts of Heat Dissipation), making it an ideal choice for inductive or proportional control of resistive loads.  Compatible with 12VDC motors, pumps, valves, solenoids, high-power LEDs, incandescent lights, and many other types of devices.

The PCA9685 chip is used as a driver for this controller, making communications easy and expandable to up to 62 devices on a single I2C port. Take control of your 12VDC motors, pumps, and valves using the Particle cloud infrastructure. The Particle Electron offers Cellular communication capabilities, allowing access just about anywhere Cellular service is available. Use the Particle Cloud infrastructure to stay in communication with this device from anywhere in the world. Our development library makes it easy to control this device with minimal coding.