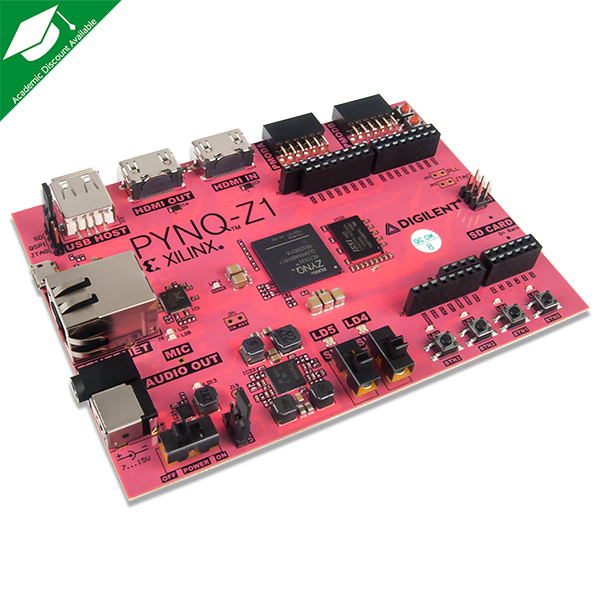 Description Reviews 0
Description
The PYNQ-Z1 board is designed to be used with PYNQ, a new open-source framework that enables...more
Close menu
Product information "PYNQ-Z1 Python Productivity for Zynq"

The PYNQ-Z1 board is designed to be used with PYNQ, a new open-source framework that enables embedded programmers to exploit the capabilities of Xilinx Zynq All Programmable SoCs (APSoCs) without having to design programmable logic circuits. Instead, the APSoC is programmed using Python and the code is developed and tested directly on the PYNQ-Z1. The programmable logic circuits are imported as hardware libraries and programmed through their APIs in essentially the same way that the software libraries are imported and programmed.

The PYNQ-Z1 board is the hardware platform for the PYNQ open-source framework. The software running on the ARM A9 CPUs includes:

For designers who want to extend the base system by contributing new hardware libraries, Xilinx Vivado WebPACK tools are available free of cost.

To find out more about PYNQ, please see the project webpage at www.pynq.io. Here you will find materials to help you get started and a forum for contacting the supporting community.

To use the PYNQ framework - it's required to have the PYNQ-Z1 boot image, which is available from the PYNQ-Z1 Resource Center. You can download the PYNQ-Z1 image and copy it to a microSD card, or purchase a card preloaded with the image.

What can you do with the PYNQ-Z1?

The PYNQ-Z1 board is a general purpose, programmable platform for embedded systems. Users can customize both its hardware and software for applications as diverse as:

The PYNQ-Z1 natively supports multi-media applications with on-board audio and video interfaces. It is designed to be easily extensible with Pmod, Arduino, and Grove peripherals, as well as general purpose IO pins.

The PYNQ-Z1 board can be also expanded with USB peripherals including WiFi, Bluetooth, and Webcams.