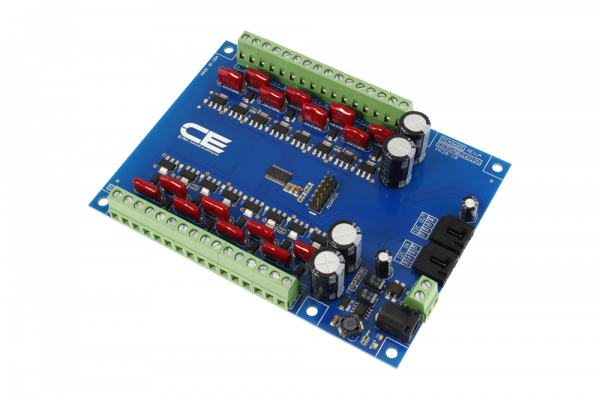 This 16-Channel power FET driver allows 12-bit proportional control of high-current loads using I2C communications, making it compatible with all computing platforms–including Raspberry Pi, Arduino, Particle Photon, BeagleBone, and much more.  This device uses sixteen BUK98150-55A power FETs, allowing PWM cloud control of 16 channels.  Control DC motor speed, vary the opening of proportional valves, adjust brightness of LEDs or incandescent lighting using the I2C data bus.  The BUK98150-55A is capable of controlling up to 12VDC and 5.5 Amps of current (8 Watts of Heat Dissipation), making it an ideal choice for most low-voltage DC lighting applications.  The PCA9685 chip is used as a driver for this controller, making communications easy and expandable to up to 62 devices on a single I2C port.

Take control of your DC lighting applications from any computing platform. Plug this device into a Particle Photon or Particle Electron for worldwide access the Particle Cloud infrastructure. Plug this device into an Arduino for easy programming and quick development. Plug into a Linux using Raspberry Pi or BeagleBone for cost sensitive applications that require some computing power. We are always developing GitHub libraries for Java, Python, and Arduino to help get you started. Our development library makes it easy to control this device with minimal coding. I2C expansion port makes it easy to add sensors or more controllers to the I2C bus.

What is the NCD I2C Interface?

NCD I2C devices will plug in to any available NCD I2C Output.  This includes just about everything we make in the NCD IoT Category, including all NCD IoT devices.  We also manufacture a wide range of I2C adapters that make it easy to plug NCD I2C Devices directly into most computing platforms.  The NCD I2C Interface adapters are available for Arduino, Banana Pi, BeagleBone, Bluz, C.H.I.P., ESP8266, Onion Omega, Particle Photon and Electron, PyCom, Raspberry Pi, 2, 3, and Zero, and Windows.  We are always working to add new platform support for NCD I2C devices.  NCD I2C Interface devices are compatible with just about everything in the microcontroller industry.

Based on our plug-and-play I2C interface standard, all NCD I2C devices are equipped with a I2C output port, making it easy to expand to a wide variety of sensors, current monitors, relay controllers, PWM controllers, and much more!  We are always designing new expansions for our modular plug-and-play I2C framework.  We are dedicated to building a product line of interconnected devices to simplify all forms of automation.  Re-use or upgrade your hardware in seconds by selecting the modules that best fit your needs, and chaining them together using the included I2C expansion cables!