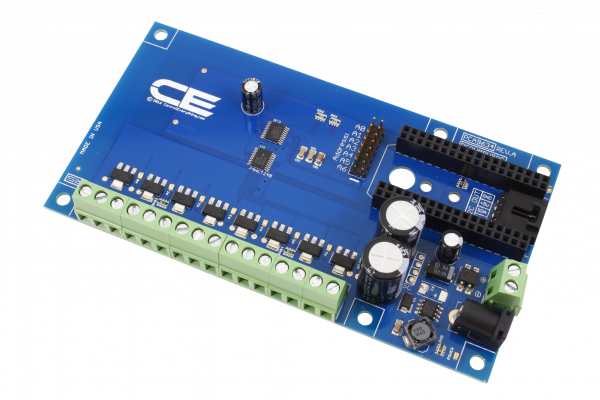 This 8-Channel power FET driver allows 8-bit variable control of high-current loads your favorite IoT interface module using I2C communications.  This device uses eight BUK98150-55A power FETs, allowing cloud control of 8 channels of High-Power LED or incandescent lighting with just a few lines of code.  The BUK98150-55A is capable of controlling up to 55VDC and 5.5 Amps of current (8 Watts of Heat Dissipation), making it an ideal choice for most low-voltage DC lighting applications.  The PCA9634 chip is used as a driver for this controller, making communications easy and expandable to up to 62 devices on a single I2C port.

Equipped with our IoT interface, plug-in your favorite IoT communication module and develop firmware control lights from anywhere in the world!  The NCD IoT interface support Particle Electron for cellular access.  Use the Particle Photon to control this device over WiFi.  The IoT interface also supports Bluz (Bluetooth BLE) or you can use one of our adapters to plug in Arduino Nano, Arduino Micro, USB, PyCom WyPy, directly on-board!  Plug in the SI I2C adapter for interface to Raspberry Pi, BeagleBone, or Arduino Uno.  The NCD IoT interface standard makes it easy to connect to just about any computer or microcontroller!

Based on our plug-and-play I2C interface standard, all NCD IoT devices support I2C communications using a I2C expansion port, making it easy to expand to a wide variety of sensors, relay controllers, PWM controllers, and much more!