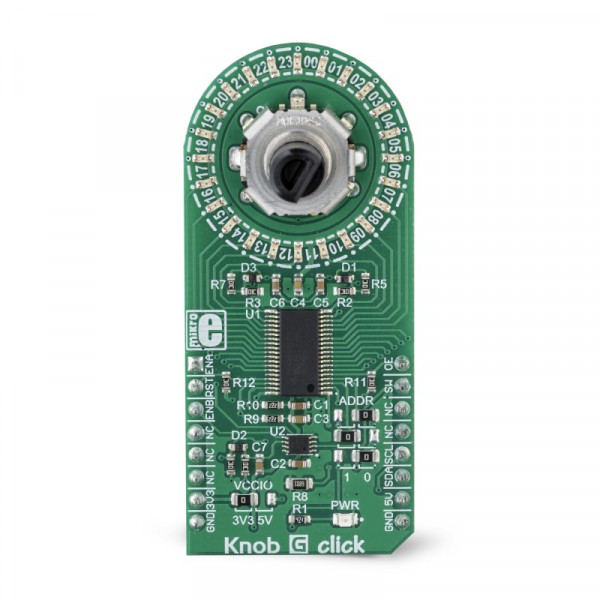 Featuring highly advanced LED driver IC which features an unparalleled flexibility and uses the I2C communication protocol, 24 individual LEDs which form a LED ring around the encoder, a high-quality rotary encoder with push-button from ALPS, and the debouncing circuitry that contains Schmitt triggers for a high reliability, Knob G click is an ideal solution for building various HMI applications where a precise input is required. Also, it can be used to add various interesting visual effects to any application.

The Knob G click consists of two distinctive sections: the first section is the rotary quadrature encoder which has its outputs routed to the GPIO pins of the mikroBUS. The encoder is supported by a debouncing circuitry, composed of passive elements and a triple inverting Schmitt trigger IC. The second section is the LED driver IC, with accompanying LEDs positioned in a form of a ring around the encoder, which makes them perfectly suited to be used as encoder position indicators. 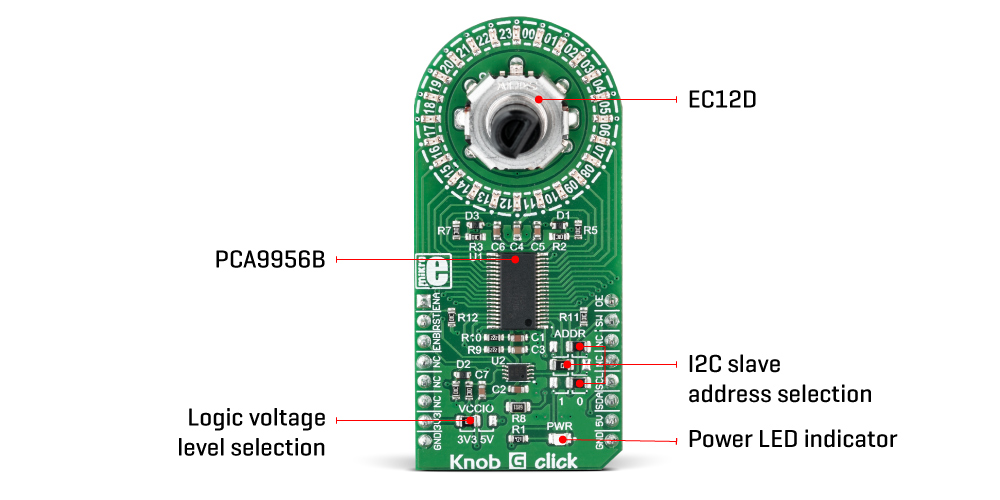 This Click Board uses the EC12D, a 15-pulse incremental rotary encoder with a push-button, from ALPS. This encoder has very good mechanical specifications: debouncing time for its internal switches ranges down to 2ms, and it can withstand a huge number of switching cycles, up to 30,000. The supporting debouncing circuitry allows the switches to fully settle before the output is triggered: when the encoder contacts are closed, the capacitor will start to discharge through the encoder contacts, and the Schmitt trigger will output a LOW logic level when its low voltage threshold level is reached, and vice versa - when the encoder contacts are open, the capacitor will start to charge through the resistor, and the Schmitt trigger will output a HIGH logic level when its high voltage threshold level is reached. This allows reading the states of two encoder pins and one switch pin directly from the code, with no bulky software debouncing applied. This makes the Knob G click usable directly within the ISRs, with the interrupt-on-change event which allows an absolute accuracy and no skipped pulses (which can occur when a regular software polling technique is used). Encoder pins are labeled as ENA and ENB for the quadrature encoder contacts, and SW for the push-button contact. These pins are routed to the, CS and INT pin of the Mirko BUS, respectively.

LED ring is composed of 24 individual green LEDs which are driven by the PCA9956B, an 8-bit, 24-channel, constant current LED driver, from NXP. This driver IC has many LED driving features, including a constant current sinking capability, which greatly simplifies the design: the maximum current through the LEDs is determined by a single resistor. The structure of this IC is such that it has separate registers for each LED channel, as well as a single register which controls all the LEDs at once. It can use the PWM signal to allow PWM dimming, but it also features current-mode dimming, by scaling down the maximum current through LEDs. The PWM signal can have a low-frequency pulse signal superimposed on a top of it. While the PWM frequency of the driver is 31.25kHz, reducing the LED flickering completely, the low-frequency signal can range from 0 to 122Hz, allowing interesting blinking effects to be produced without using the computing power of the microcontroller (MCU). The LED dimming is very smooth since the PCA9956B supports up to 256 steps for the PWM duty cycle (8-bit). A full list of features can be found in the PCA9956B datasheet, in the download section, below.

The OE pin of the PCA9956B is routed to the PWM pin of the mikroBUS. When the LOW logic level is applied to the OE pin, the LED outputs will be enabled. This pin is pulled to a HIGH logic level by a resistor. Applying a PWM signal at the OE pin will result in the dimming of all LEDs at once. It can be used as another method of dimming, or as the ON-OFF switch for the entire LED ring. The LED driver IC can be reset by pulling the RST pin to a LOW logic level. This pin is pulled to a HIGH level by the pull-up resistor. The pulse can be incredibly short (2.5 µs) but the device will not be ready for another 1.5 ms after the reset pulse. Besides the hardware reset, the PCA9956B supports a software reset, which is necessary after the device is set to operate in the fast I2C mode (including the clock speed above 100 kHz).

The PCA9956B IC uses the 3.3V rail of the mikroBUS so there is no significant voltage drop, which causes thermal dissipation. However, turning on all LEDs at once with the maximum current set can cause the Knob G click to warm up a bit. This is expected, as the thermal dissipation of each channel is adding up to the sum dissipation of the entire IC. The PCA9956B IC features thermal shutdown protection, along with the set of error reporting features: it can report both open-circuit event and short-circuit event for each LED. These errors will be written in the ERR registers, one for each LED channel. The PCA9956B datasheet explains how to interpret the values of these registers.

The logic voltage level can be selected by the SMD jumper labeled as VCCIO. This jumper determines the logic levels for the logic signals from Schmitt triggers, as well as for the I2C communication with the PCA9956B. This allows the click board to be interfaced with a wide range of different MCUs, both compatible with 3.3V and 5V logic voltage levels.

Note: please consult the datasheet of the PCA9956B if you need to change the default I2C slave address

We provide a library for the Knob G click on our LibStock page, as well as a demo application (example), developed using MikroElektronika compilers. The demo can run on all the main MikroElektronika development boards.

The library initializes and defines the I2C bus driver and drivers that offer a choice for writing data in the register and reads data from the register. The library includes the function for reading the Encoder position and sets a new start position. The user also has the functions for full control LEDs.