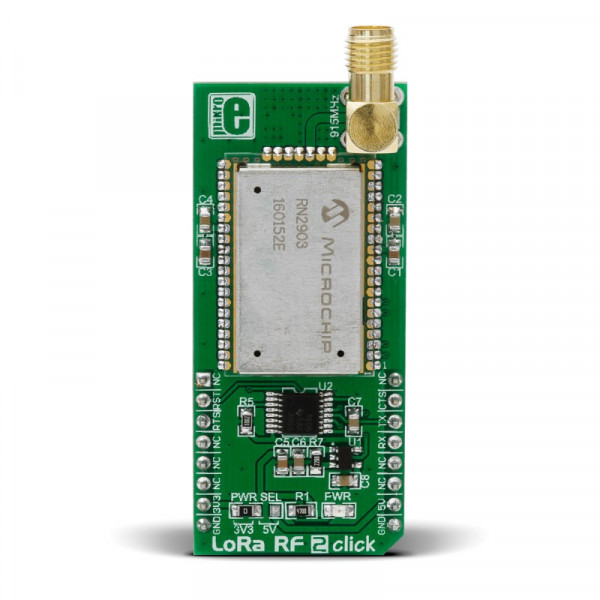 LoRa 2 click carries Microchip’s RN2903 915 MHz Radio Modem compliant with regulations for use in the United States, Canada, Australia and New Zealand. The click is designed to use either a 3.3V or a 5V power supply. It communicates with the target microcontroller over a UART interface (TXD, RXD, CTS) with the addition of a Reset pin (RST) and RTS pin.
A European version is available separately.

NOTE: The antenna is sold separately.

The RN2903 module has a specified range of >15km in rural and suburban settings, and >5km coverage in urban areas.

A LoRaWAN™ Class A protocol stack is embedded (bidirectional end devices), as well as an ASCII command interface accessible through UART. The high receiver sensitivity can go down to -146 dBm.

The architecture for this network is usually arranged in a star-of-stars topology. A gateway relays messages between end-devices (for example, battery operated devices in home automation) and a central core network server.

This table shows how the pinout on LoRa 2 click corresponds to the pinout on the mikroBUS™ socket (the latter shown in the two middle columns).

Code examples that demonstrate the usage of LoRa 2 click with MikroElektronika hardware, written for MikroE compilers are available on Libstock.

LoRa process must be kept inside an infinite loop.

Study the data sheet before applying either Lora or Lora 2 click in your designs. For example, here's what the official data sheet states about compliance with USA regulations:

On the other hand, in New Zealand, it would be your responsibility to prove the device is compliant. To quote from the data sheet: "RN2903 module RF transmitter test reports can be used in part to demonstrate compliance against the New Zealand "General User Radio License for Short Range Devices". New Zealand Radio communications (Radio Standards) Notice 2010 calls up the AS / NZS 4268:2008 industry standard. The RN2903 module test reports can be used as part of the product certification and compliance folder."

You can find all the relevant data on page 13 of the official data sheet.